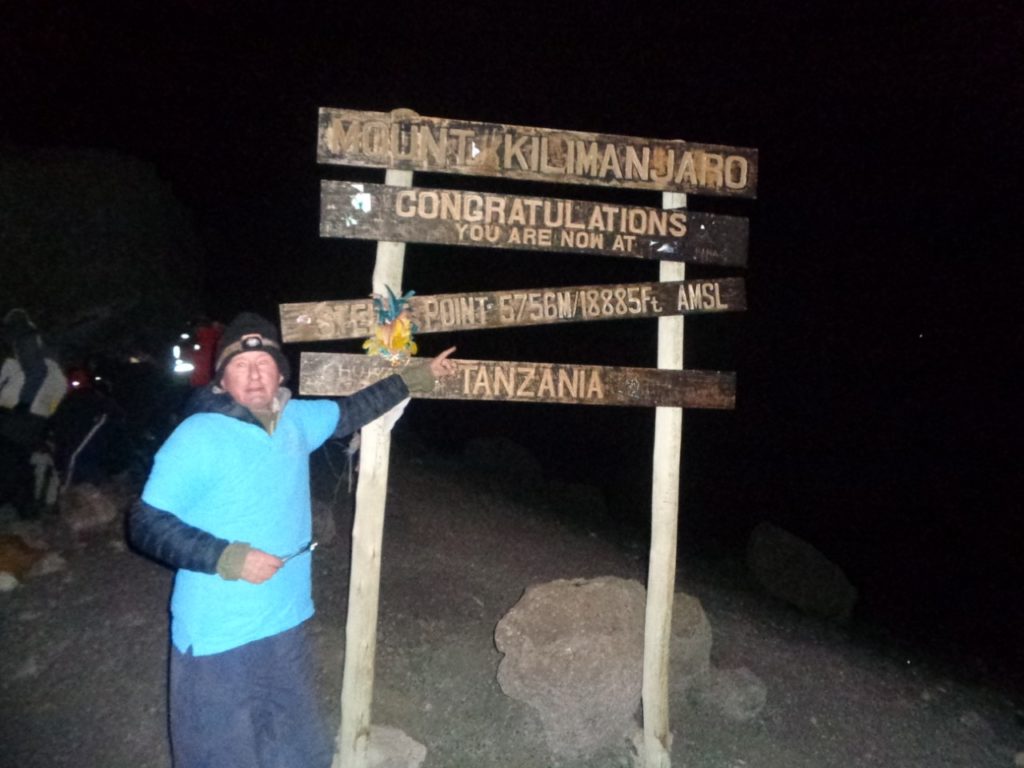 Climbing Kilimanjaro probably wasn’t the smartest idea I have ever had but, as I enjoy walking in the mountains here in Spain, I thought I would give it a go, & before the Chinese built a cable car to the top.
So early in September I arrived in Arusha in Tanzania ready to take on the mountain with another twelve ” idiots ” who I first met on arrival. For those of you who are interested (both of you ! ) Kilimanjaro is a dormant volcano & the highest free-standing mountain in the world at 5895 meters (19341 feet). It last erupted about 200,000 years ago.
It was a 120km drive from our hotel to the start point of our climb & our initial impression of Kilimanjaro was expressed by a young member of our group when first seeing it from a distance of approximately 50kms away. ” It doesn’t look very high to me” she said. ” Look above the cloud line ” said our guide. ” Jesus Christ!” came the reply.
The brochure had described the walking conditions as a long & hard trek because of the high altitude & level of physical effort needed and that the summit day would be the toughest physical challenge of your life. Even if we considered ourselves fit, we would find the climb very hard depending on how well the body acclimatises to high altitude. They were quite right.
The average age of our thirteen strong group was 46. At 71 I was the eldest by some margin but, as it happened youth didn’t seem to be much of an advantage as some members of our group struggled and two had to give up on the final nights ascent.
We were supported on our trek by a cook, 12 guides & about 30 porters, the latter being responsible for erecting and taking down our tents as well as carrying our luggage ( 20kgs each ) between the campsites. They worked extremely hard and were worth far more than the 10$ per day they were paid.
This was an 8 day/7night trek only covering about 6 kms each day because of the difficulty. Initially we were trekking along rainforest tracks (the wildlife was mainly monkeys & birds) with steep ascents before entering open moorland & walking over the vast lava deposits. As you will appreciate, Africa is a huge continent and the views were amazing looking out over the vast barren plains. One of the days was spent ascending and then descending to help acclimatise ourselves. When ascending we had to walk very slowly due to the lack of oxygen as there is 50% less oxygen at the summit than at sea level. A leading light in the British Mountaineering Society was asked how fast you should walk up the Kilimanjaro mountain. His reply was ” imagine a 90-year-old man with arthritis walking backwards; if you walk at that speed you are walking too fast! ” Believe me, on the last push to the top, it’s true.
Trekking during the day was in fairly warm temperatures but at night it became very cold. The high altitude and extended wilderness camping was not enjoyable. It was necessary to wear layers of thermal clothing in your sleeping bag just to stay reasonably warm. It became dark at 7-30pm so that was bedtime. Then after a restless night we were woken by the guides at 6am with a cup of ” tea ” (warm milky water) and a plastic bowl of luke-warm water to wash in! Personal cleanliness on the trek was soon forgotten!
The food prepared by our cook was very basic but edible. Porridge & eggy bread for breakfast and stew or pasta for dinner, all designed to give us stamina. No chance of having a take-away delivered!
” Summit day ” began at 11pm the previous night, ascending by torchlight so that we could be up on the crater rim by sunrise standing on the ” Roof of Africa “. The steep climb over loose volcanic scree, zigzagging upwards for a period of some 6 hours was extremely hard and without one of our guides bullying me to keep going, I would never have made it. In fact, about 200 meters from Stella Point (5756 meters / 18885 feet) I started to hallucinate. A common problem with lack of oxygen. I was seeing boulders & bright purple plants that weren’t there. When I finally got to Stella Point our chief guide, Mussa, was there to greet me. He then turned round & walked through a 4ft wall! (who needs LSD!)
130 meters above Stella Point is Uhuru Peak which was a further 2 hours up and down trek. I was ” wasted ” and decided it was not worth risking my health just for a further 130 meters so, after taking numerous photos, enjoying the sunrise and the spectacular glaciers and ice cliffs that still occupy most of the summit area, I descended to our final campsite. This had been an extremely long and hard day with some 13 hours of walking at high altitude
The following day we descended further through tropical forest to the national park gate to meet our mini bus back to our hotel and a welcome shower and beer.
I was 8kgs lighter than when I started!
Did I enjoy it? – because of the difficulty and rough cold camping, the answer must be ” No “
Am I glad I did it? – now it’s all over, the answer is a definite” Yes “